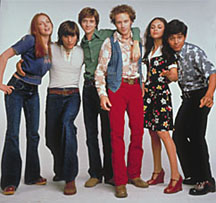 The official Mila Site is here

Check out one of the most complete Mila Kunis fan pages around! click here

See our MAIN SITE for more interviews, photos, and reviews.

FEZ - Date of Birth: 1980, Venezuela Wilmer Valderrama moved to L.A. from Venezuela only four years ago. An avid sports fan, Valderrama spends his spare time playing soccer and basketball. He also enjoys playing chess. He currently lives with his family in a suburb of Los Angeles.

Laurie Forman - Lisa Robin Kelly is the newest addition to the cast of THAT 70s SHOW. She portrays Laurie Forman, Erics college drop-out sister who constantly torments him and his friends. During her time off Lisa enjoys practicing yoga and entertaining her neighbors with her talents in karaoke. She also volunteers her time with philanthropic organizations that touch her heart such as Hollygrove, the Sierra Club, and PETA

Bob Pinciotti - Don Stark portrays Bob Pinciotti, the annoyingly upbeat and nosy neighbor to the Formans.He currently lives in Los Angeles with his two young daughters. In his spare time, he enjoys coaching his daughters sports teams and volunteering for "Indian Princesses," a program at the YMCA.

Stephen Hyde - Date of Birth: 1976, New York Danny Masterson has been into acting since he was only four years old. By the age of 16, he had already been in over 100 commercials. Shortly after moving to L.A., Danny had landed his first motion picture role in "Beethoven's 2nd". He has been in many other films (not to mention tons of television shows).

Michael Kelso - Date of Birth: 1978, Iowa Ashton Kutcher was born and raised in Homestead, Iowa where he lived on a farm with his family. Ashton worked as a dust sweeper at the General Mills plant in Cedar Rapids. After being discovered by a local model/talent scout, he moved to New York to pursue acting.

Jackie Burkhardt - Date of Birth: 1983, Russia Mila Kunis moved to Los Angeles with her parents and older brother when she was seven years old. After learning to speak English, Kunis enrolled in acting classes at the Beverly Hills Studio. It was here that she was discovered by her manager while performing in a showcase. Soon after, Kunis began landing numerous commercials and has since gone on to build a strong resume in both feature films and television.

Eric Forman - Date of Birth: 1978 Topher Grace is a newcomer to the entertainment industry, whose talents were brought to the attention of Bonnie and Terry Turner. Topher was discovered while performing in a high school play. He recently finished his freshman year at the University of Southern California.

Donna Pinciotti - Date of Birth: March 7, 1980; Watchung, NEW JERSEY, USA. Laura Prepon was raised in Watchung, New Jersey. She began acting at the age of 15. She enjoys dance and has learned ballet, jazz, and modern. Laura is also on her school's Tennis team and she also enjoys gymnastics.

Red Forman - Kurtwood Smith portrays Red Forman, the ultraconservative Dad to Eric and Laurie on THAT 70s SHOW. Smith was born in New Lisbon, Wisconsin, but was raised in California. He studied drama at the College of San Mateo and San Jose State and earned a drama fellowship for Stanfords MFA program. In the mid 70s, he began working regularly at the California Actors Theatre in Los Gatos and moved to Los Angeles in 1979 to seek film and television roles.

Midge Pinciotti - Tanya Roberts portrays Midge Pinciotti, the open-minded, recently converted feminist who is next door neighbor to the Formans on THAT 70s SHOW. Roberts was born in the Bronx, New York. In New York, she studied acting under Lee Strasberg and Uta Hagen. Roberts got her first real break as sexy private investigator Julie Rogers on the ever-popular crime drama "Charlies Angels." She currently lives in Los Angeles with her husband, Barry Roberts, and their dogs.

Kitty Forman - Debra Jo Rupp plays Kitty Forman, the endearing mother of Eric on THAT 70s SHOW. Rupp has been featured on numerous television shows including roles on NBCs hit series "Friends (recurring as Phoebes sister-in-law), "Seinfeld" (recurring as Jerrys ditsy booking agent), "Caroline in the City" and "ER." Additionally, she appeared in the Emmy-nominated HBO series "From the Earth to the Moon" (episode directed by Sally Field entitled "First Wives Club"). Rupp also starred in such telefilms as "The Invaders," "In The Line of Duty  Ambush in Waco" and "A Woman Scorned: The Betty Broderick Story."

"That 70's Show" TM and © Fox and its related entities.
All rights reserved. Any reproduction, duplication or distribution of these
materials in any form is expressly prohibited.
"This web site, its operators and any content on this site relating to
"That 70's Show" are not authorized by Fox."

Carsey-Werner's That '70s Show site
carsey-werner's "That '70s Show" site. contains the most up-to-date news on the show. This is the official That 70's Show site, set up by Carsey-Werner himself. There is everything here you could immagine.

THAT 70s SHOW is a Carsey-Werner Production.